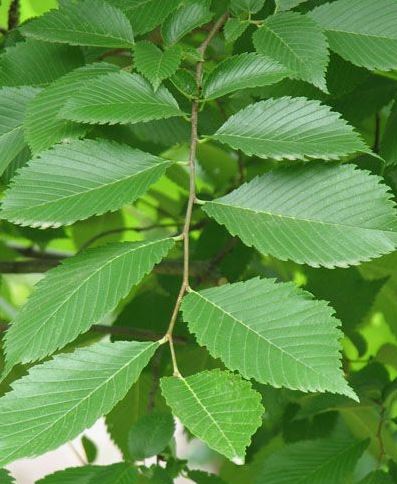 Elm trees are popular trees in the DFW area. Cedar elms and Lacebark elms are the ones you will see most often.  Lacebark elms are used as street trees in some areas.  There are some big differences in the elms available for this area so be sure to read about each type first before purchasing.  They are long-lived trees and grow very large so you want to make sure you are putting the correct choice in your landscape.

Cedar elm, Ulmus crassifolia the most common Elm in Texas, is susceptible to Dutch elm disease (DED), though less so than American elm.  It is moderately damaged by the elm leaf beetle Xanthogaleruca luteola. Cedar elm is also known as Texas fall elm.

Cedar elm also suffers from a vascular wilt, the symptoms often confused with those of DED. It is a tough, adaptable shade tree with excellent drought tolerance and beautiful golden yellow fall color. Its leaves are small and rough, and glossy green in the spring. Cedar Elm can withstand heavy, poorly drained clay soils and soils that are moderately compacted, therefore they grow well in the DFW area.  Worth noting, it is the only native Texas elm that flowers and sets seed in the fall. It can grow to a height of 80 feet. The brown winged seed is eaten by birds and squirrels and other animals. Cedar elm act as host plants for some butterfly species including Mourning Cloak and the Question Mark.

It is not known why, but Cedar elms are very susceptible to mistletoe. Mistletoe is a parasite plant that roots itself into the vascular system of the tree, using nutrients and water from its system. In some cases, if the mistletoe is not removed, it can be damaging to large sections of a tree and can even be fatal.  Mistletoe can kill the end of branches and this gives elm leaf beetles or other insects a place to establish.  Unfortunately, there are not any treatments that are safe to use to kill mistletoe without killing the tree.

Another species of elm, easy to confuse with the American white elm is the slippery elm (Ulmus rubra). Slippery elm prefers growing in deep moist soils of riverbanks or on shaded moist hillsides. It has a dark green leaf that is larger than the Cedar elm and is very rough on the upper side. Cedar elm is very rough on the underside. It is believed that its name came from the fact that early pioneers would chew the white inner bark to quench thirst. In her book Trees, Shrubs, and Vines of the Texas Hill Country Jan Wrede writes that the inner bark can be heated and steeped in water to make a “healthful, soothing tea.” from the extract.

American elms (Ulmus Americana) are classic shade trees, which can reach a height of 100-125 feet.  They can be found as wide as 50-90 feet.   American elm isn’t suggested for the DFW area because of its susceptibility to Dutch Elm disease. American elm populations were almost completely eliminated by Dutch elm disease which destroyed as many as 40 million elms through the years. The fungus, which came to the United States from Europe on logs around 1927-1930 and was confirmed in Texas in 1970. American elms used to line the streets of many homes until Dutch Elm disease came to the US.

Chinese Elm, Lacebark Elm, Ulmus parvifolia is a great choice of tree for the DFW area.  It displays small glossy leaves and beautiful peeling bark.  Interestingly, the bark of Chinese elm species is very different from the bark of other elms.  It is thinner bark and has a mottled appearance, with pieces of bark peeling away showing an orange or burnt brown color underneath. Lacebark Elms are resistant to Dutch Elm disease, black leaf spot, and most insects like Elm leaf beetles.  They are virtually carefree adapting to most environments. Lacebark Elms grow to about 40 feet tall. This is about half the height of a Cedar Elm.  Worth noting, popular improved varieties include Athena Ulmus parvifolia ‘Emer I’ and Allee Ulmus parvifolia ‘Emer II.

In conclusion, for best results, all types of Elm trees should be fertilized regularly.  A balanced fertilizer applied through root level injections of fertilizer that can give them the nutrients they need for a growing season is ideal.  For more about Deep Root Feeding, check out this article  Deep Root Feeding at Green Top Lawn Care.com